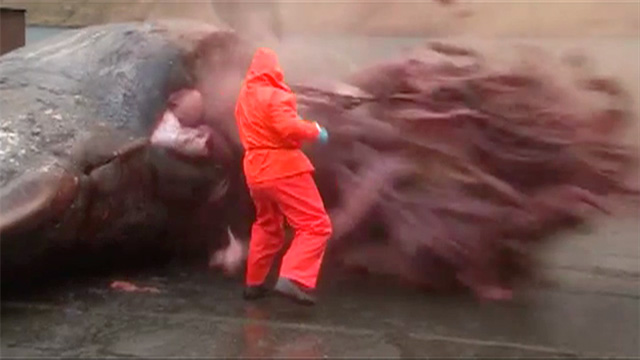 A 40-ton sperm whale explodes on an animal control employee at Bayport.

BAYPORT, Florida — Holiday revelers who stopped to regale at the whale that beached itself four days ago got more gore than they bargained for when the 40-ton beast blew up on Monday.

After several days decomposing under the sweltering Florida sun, the whale had swelled to nearly twice its normal size. When a county animal control officer attempted to punch a hole in the whale’s blubber to release some pressure, he was greeted by violent gush of guts that sprayed blood hundreds of yards, covering more than 30 people enjoying a Memorial Day barbecue in fleshy bits and misting their cars parked nearly 200 yards away.

Hernando County Animal Control Assistant Coordinator Henry Wilson said the whale could take weeks to clean up because every hourly employee in his department quit after hearing of the explosion.