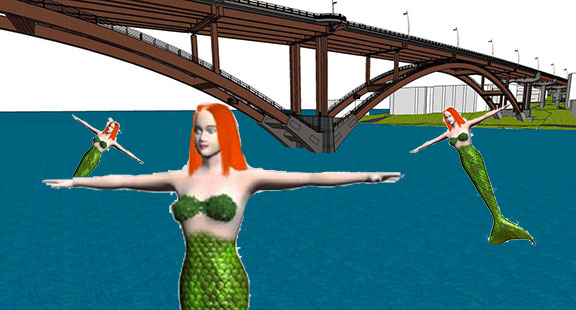 WEEKI WACHEE — County planners have confirmed several controversial new details in a plan to build a toll bridge spanning the Weeki Wachee River, including charging newer residents less to cross and using the funds to build dog parks throughout the county and paint bike lanes along U.S. 19.

The fee structure will offer newer residents, defined as those who can prove Hernando County residency of less than 10 years, a 75-cent fee. More veteran Hernandies will have to pay $1.50 to cross the proposed bridge that will replace the existing structure that spans the river and connects Shoal Line Boulevard North and South.

Assistant County Planning Czar Hank Boolfert said the rates will foster a “good” feeling in newer residents and make them more likely to stay in the county, bolstering its property values and economic clout.

“This is a plan we’re seeing more and more larger cities adopt to great success,” Boolfert said in an exclusive interview with the Spring Hill Courier. “San Diego began something similar about three years ago and a lot of people stopped living and working there, but they raised a lot of money. They needed the money more than the people, and that’s kind of how we feel right now with Obama doing what he’s doing to the county budget.”

Drivers wishing to cross the bridge will have to supply papers to prove their length of residency. The county suggests the following methods to prove short-term residency needed for the discount:

* A notarized, dated, color photo the driver moving boxes into the home at the address listed on his or her drivers license

* If the driver is less than 10 years removed from attending school, he or she may bring sealed, official transcripts from the out-of-district school he or she attended prior.

* Three consecutive months’ worth of power bills in the driver’s name from an out-of-county address he or she lived at prior to moving to Hernando County.

The county currently plans to allow non-Hernandies to cross for free, which Boolfert said could lead to more trade opportunities.

County officials have said they will finance the bridge through a combination of private loans and by charging small amounts to each approved employee’s county expense card.

Half of the proceeds will be used to paint bicycle lanes along both sides of U.S. 19 from County Line Road north to State Road 50. The other half will be used to build a series of dog parks. Boolfert said the county has yet to determine where it will build the parks but said they are likely to go in near more affluent neighborhoods.

“If you’re living in a nice development, you probably don’t have a big yard for the dog to run in, and it’s more likely that you can afford pest control chemicals that dogs shouldn’t be playing in anyway,” Boolfert said. “We want to make sure those pets most at risk are safe.”