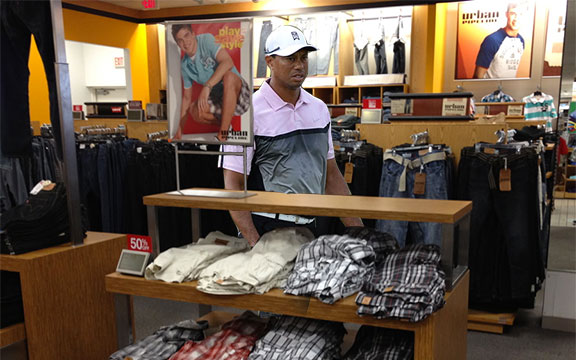 Tiger Woods was spotted shopping at the Kohl’s on Spring Hill Drive on Sunday.

That’s the impression he gave shoppers who spotted the world-famous golfer perusing the jewelry section at Kohl’s department store on Spring Hill Drive on Sunday.

While the rest of the PGA Tour spent the weekend focused on making the cut at the Crowne Plaza Invitational, Woods was apparently more worried about slashing prices, one employee said.

“He wasn’t interested in the real expensive stuff,” said Kohl’s jewelry associate Gretchen Carlson, who waited on Woods for more than 20 minutes. “But he did look through some of the cuter rings. He had good taste, and you could really tell he wasn’t interested in impressing someone with just a price tag.”

Woods told Carlson he was most interested in a $2,000 white gold, ⅓-carat diamond Simply Vera wedding band and said he would likely buy it online when he got home.

The former world No. 1 also also spent time perusing the young men’s section and tried on a dress shirt he did not end up purchasing, employees said.