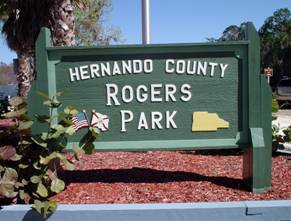 Rogers Park, where authorities broke up the “Rogers Ark” shoot.

BROOKSVILLE, Florida — Hernando County law enforcement officials say they have broken up a disturbing ring of pornographic movie shoots taking place at several public parks and schools throughout the county.

Officials arrested 14 people at three different parks while working for three separate pornographic productions late Thursday night. Each is charged with felony lewd and lascivious behavior, and three face additional charges for filming without a permit.

The activities came to the attention of officials when a detective noticed an online ad casting adult actors for a pornographic production to be called “Rogers Ark.” The film, which was being shot Thursday at Rogers Park on Shoal Line Boulevard, depicted two males “mating” with a female actor with the plot revolving around the need to repopulate the earth after a nuclear war killed every human but the three people who happened to be at Rogers Park at the time of the explosions.

“It was absolutely sick when you think about what must have been going on in these people’s heads when they were acting out this very specific fetish for county property.” — HCSO Lt. Carl Nunez

The police reports were rife with more site-specific plots and trends that point to what detectives called a culture of local-themed pornography.

In one case, the performers were believed to be on psychedelic drugs while filming a “Dark Side of the Moon”-themed scene at John D. Floyd K-8 school, apparently a nod to 1973 album by classic rock group Pink Floyd. The film was being produced under the working title “B.J. Floyd.”

“What we found was absolutely disturbing,” Lt. Carl Nunez said. “We found a group of people that appeared set on creating pornographic films specific to Hernando. There was ‘Rogers Ark,’ and maybe more upsetting were the people tripping on drugs at the school. It was absolutely sick when you think about what must have been going on in these people’s heads when they were acting out this very specific fetish for county property.”

Authorities said they believed the pornographic shoots had been going on for years and that there may still be production companies filming around the county. But police said they had not yet established which public sites may have been used or when and are encouraging all local schools to sanitize students’ desks and lunchroom tables.